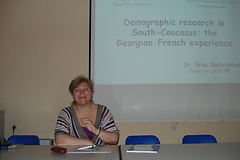 Irina Badurashvili is a Director of the Georgian Centre of Population Research (GCPR), a national research institution, operating as a non-government and non-profit organization. She graduated in Moscow Institute for Economics and Statistics and in 1990, she received there her PhD in Demography. Her research interests comprise different topics of demographic and social research, including fertility, family demography, aging, mortality and migration. She has been commissioned as a country expert by UN, Council of Europe, World Bank, European Training Foundation, European University Institute etc. She is an author of 2 scientific monographs and has also authored/co-authored plenty of scientific publications, including those in peer reviewed journals. Since 2004 she coordinates a Generations and Gender Programme in Georgia.